In 2010, JEREMY DITTUS earned the Diplôme Supérieur, (a doctoral equivalent in Switzerland) from L’Institut Jaques-Dalcroze in conjunction with La Haute École de Musique de Genève and Le Conservatoire de Musique de Genève. Before Switzerland, he had the honor of studying at the Longy School of Music for the Dalcroze Certificate and License. He completed a doctorate of musical arts in piano performance from the University of Colorado at Boulder; for the master of music, he studied piano performance and music theory at the Cincinnati College-Conservatory of Music. During his undergraduate work, he obtained bachelor degrees in piano performance and chemistry. Former teachers include Lisa Parker, Anne Farber, Ruth Gianadda, Marie-Laure Bachmann, Sylvia del Bianco, Sylvie Morgenegg, Laurent Sourisse, Andrew Cooperstock, Michael Chertock, Frank Weinstock and George Cherry.

Jeremy enjoys a career as a pianist, theorist and Dalcroze Education specialist. An avid recitalist, he has performed solo and chamber programs and presented Dalcroze masterclasses throughout the United States, Europe and South East Asia. He currently directs the Dalcroze School of the Rockies Dalcroze Academy teacher-training center at Metropolitan State University of Denver, where he serves on the faculty. A former Lecturer in piano, theory and solfège at the Baldwin-Wallace Conservatory in Cleveland, Jeremy also has taught undergraduate solfège, piano and composition courses at the University of Colorado at Boulder as well as eurhythmics and solfège at l’Institut Jaques-Dalcroze in Geneva, Switzerland, and Colorado State University in Fort Collins, Colorado. He currently serves on l’Collège de l’Institut Jaques-Dalcroze.

Jeremy is the founder and director of the Dalcroze School of the Rockies in Denver, Colorado, one of the few authorized Dalcroze training centers in the United States. The DSR offers Dalcroze Education classes (eurhythmics and rhythmic-solfège) for children (pre-kindergarten through high school), adult enrichment classes and full time study toward the Dalcroze Certificate/License (eurhythmics, solfège, improvisation, pedagogy and plastique animée).

​Additionally, he has presented Dalcroze workshops at home and abroad including:He also serves on the state board for the Colorado Federation of Music Clubs and functions as the vice president of the Dalcroze Society of America. He recently has published books on Dalcroze Education, including Embodying Music: A Textbook for Dalcroze Teacher Training and five books that correspond to the Rhythmic-Solfège youth program in place at the Dalcroze School of the Rockies. While in Geneva, he received top honors including the 2009 Prix pour les qualities musicales exceptionnelles and the 2010 Prix pour les qualités artistiques et pédagogiques exceptionnelles.
AVI FRIEDLANDER
TAMARA GONZALEZ
AARON KAPLAN (Conducting)
​ 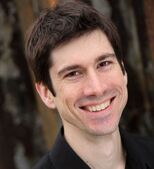 Andrew holds degrees from Oberlin College and Conservatory, where he was a violin student of Gregory Fulkerson and graduated with highest honors in History. He studied privately for two years with Jorja Fleezanis, then concertmaster of the Minnesota Orchestra, before pursuing a masters degree in violin performance with Sherban Lupu at the University of Illinois.

Andrew trained as an Alexander teacher with Joan and Alex Murray at the Alexander Technique Center Urbana. While he specializes in working with musicians, the Alexander Technique truly is for anyone: Andrew has worked with performers of all kinds, as well as neuroscientists, psychologists and doctors, librarians, graphic designers and IT specialists, market traders and not-for-profit policy wonks, and once, a nun. They all shared an interest in learning to move with greater ease, take charge of their health, and perform at their best.

As a violinist, Andrew has performed in productions through Broadway in Chicago, the Chicago Shakespeare Theatre, Writer's Theater, and Victory Garden's Theater. He is a member of the festival orchestra at the Cabrillo Festival of Contemporary Music in Santa Cruz, CA. He has appeared with the Grammy Award-winning ensemble, eighth blackbird, along with the New Millennium Orchestra, ensemble dal ninety, International Contemporary Ensemble, Spektral Quartet, and appeared as a backup musician with Jay-Z, Mary J Blige, and Susan Boyle on the Oprah Winfrey Show.
CAROL OURADA

Wayne Krigger (Music and Movement) began playing the cello at the age of 13 in the Louisville Public Schools. Two years later, he was teaching cello and directing ensembles in a summer program for inner-city youth under the mentorship of Virginia Schneider, a professional musician who introduced the Suzuki method to Louisville. At this time, Ms. Schneider insisted that Wayne begin learning and playing the violin, also. Wayne continued teaching cello in after-school programs throughout high school. Those few years of teaching and playing made it clear to Wayne that this would be his passion in life.

Wayne received his Bachelor of Music and Master of Music in cello performance at the University of Louisville and, in 1983, joined the university as a teacher in the Preparatory Department. He also began teaching fitness, dance, and tennis in the Health, Physical Education and Sports Studies Department. After 13 years in the HPESS Department, he left to devote more time to teaching and performing. He began traveling as a guest clinician to other preparatory programs in the country to teach cello, and to coach and conduct ensembles. Wayne is in great demand as a workshop teacher throughout the Midwest and South. Locally, Wayne has conducted the Governor’s Scholar Orchestra and the All County Orchestra for Middle Schools in Kentucky, which he greatly enjoyed.

When traveling, Wayne observed that many children did not seem to be connected in mind, body, and spirit with their music so he developed a creative movement program. This program engages the body’s large muscle groups and voice while still maintaining the student’s individuality by using music from the early Suzuki repertoire and supplementing with music from other venues and cultures.

Wayne is a past member of the Louisville Orchestra. Currently, he performs in the Highland Chamber Players, which is an extremely popular group in the Louisville area. Wayne was one of the original members of the Highland Chamber Players, which was formed in 1982. The HCP plays over 150 weddings yearly as well as many other events. It also provides educational concerts for children in the public schools. Individually, Wayne takes great joy in volunteering at Kennedy Montessori School. Since 1993 he has taught violin to students on a weekly basis at Kennedy.

Wayne and his lovely wife, Karen, have been blessed with two children: Jonathan and Kayla.
Bonny Lundin-Scheer