​SHARON CHUNG enjoys an active life as a chamber and orchestral musician. She has been co-principal viola of the Civic Orchestra of Chicago, assistant principal viola of the Illinois Symphony Orchestra, and spent two summers with the National Repertory Orchestra, as principal violist and a featured soloist in Richard Strauss’ Don Quixote. Sharon currently performs with the New Millennium Orchestra. Sharon is on the faculty of the Music Institute of Chicago, where she teaches Suzuki violin and viola and Musikgarten. As a chamber musician, she has performed in master classes for members of the Alban Berg, Cleveland, Tokyo, and Pacifica String Quartets. Sharon graduated magna cum laude from Illinois Wesleyan University with a Bachelor of Music degree in performance. She also holds a Masters of Music degree from Northwestern University, where she studied with Roland Vamos. She is also a registered Suzuki teacher through book 7 and has completed her training with Pat D'Ercole, Alice Joy Lewis, Joanne Melvin, and Ann Montzka-Smelser. DANIEL GEE CORDOVA currently resides in Austin, Texas where he directs the Austin Suzuki Music School which offers Suzuki Violin and Viola study for all ages as well as Suzuki Early Childhood Music for children ages 0-3. Daniel is the director of the Greater Austin Suzuki Institute, which had its inaugural year in 2013.

Daniel is an active clinician giving presentations at National Conferences as well as being a guest teacher at workshops around the country. He has presented at the Suzuki Association of the Americas conferences, ASTA conference, Texas Music Educator’s Conference, and the Texas Orchestra Director’s Association Conference, and participated in the SAA Parents As Partners (2012, 2013, 2016). Daniel has been invited to guest conduct the Texas Region Middle School String Orchestras for Region 11 in San Antonio and Region 18 in Austin.

Daniel Gee Cordova serves as the Assistant Principal Viola with the Austin Opera. Outside of teaching and performing, he enjoys spending time with husband Jerry and their two terriers, Bamboo and Tristan. 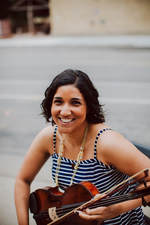 TAMARA GONZALEZ began her musical studies at the age of four in the Washington DC area. At age nine, Tamara moved to Puerto Rico with her family and began studying at the Puerto Rico Conservatory of Music Preparatory Program, and was admitted into the FOSJA summer festival and continued participating for the following six summers. During her time living in Puerto Rico, Tamara studied with Jaime Medina, and served as Concertmaster for the Advanced Orchestra for two years. In 1999, at the age of 15, Tamara graduated early from the Preparatory Program and began studying in the P.R. Conservatory of Music, with Henry Hutchinson. In the summer of 1999, Tamara attended Interlochen Arts Camp for the first time and was a member of WYSO. She also began her viola studies at Interlochen that summer and continued to attend Interlochen through the summer of 2001, when she was awarded the Emerson Scholar for Puerto Rico. Also in 2001, Mrs. Gonzalez won first place at the Puerto Rico Conservatory Concerto Competition and first place at the FOSJA Concerto Competition. In the fall of 2001, Tamara began her studies at DePaul University with Joseph Genualdi and later with Robert Waters. She served as Concertmaster for the DePaul Chamber Orchestra through-out her time at DePaul and graduated in 2005 with a BM in Violin Performance. Tamara returned to DePaul and in 2010 obtained an M.M with Honors in Violin Performance, studying with Olga Kaler.

Tamara Gonzalez enjoys an active career as a free-lance violinist and violin/viola instructor in the Chicago area. She has received Suzuki Teacher Training through Suzuki Violin Book 10, and has taken Violin Practicum and Suzuki Principles in Action. She has also taken Viola Book 6 with William Preucil and plans to continue her Viola Suzuki Training. Tamara is an adjudicator in training with the prestigious Royal Conservatory of Music Development Program and anticipates admission into the College of Adjudicators in late 2015. She has taught at DePaul Community Music, Smiling Strings, Lane Technical and Vernon Hills High Schools, Sherwood Community Music School and Music Institute of Chicago. The Chicago Suzuki Institute invited her to join their faculty for the 2014 camp.

Tamara served as Suzuki Department Head for Sherwood Community Music School from 2011-2014. She has had success instructing Suzuki students as young three years old, as well as working on advanced concerti with her high school students. Tamara is an active performer, and has played as a member of the Sphinx Festival Orchestra, Chicago Classical Symphony, Rockford Symphony and the Chicago Sinfonietta. She currently resides in Minneapolis, MN and is a faculty member at MacPhail Center for Music and a member of the Stone Arch Collective.
ANN MONTZKA SMELSER